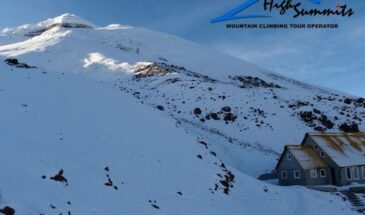 Climbing Cotopaxi and Chimborazo in 5 days for people who are already acclimatized.
This 5-day tour combines the ascents of the 2 most popular and desired mountains in Ecuador: Cotopaxi and Chimborazo.
Recommendation: Be already acclimatized, because this is a very important factor to reach the summits.
Join us and enjoy an unforgettable climbing experience in the mountains of Ecuador!

When is the best time to climb in Ecuador?

Conditions on the mountain are generally good from June to early September, with winds tending to pick up during August. However, it must be said that with global climate changes, it is becoming increasingly difficult to recommend the best period for climbing in Ecuador. Mountaineering is basically possible all year round, with November/December/January/February and June-September usually having good conditions and the months of March/April/May tend to have the most precipitation.